10th January 2018 | Nanton, Alberta, Canada and Lincoln, Lincolnshire, England. Today Bomber Command Museum of Canada (BCMC) announced plans to donate aluminium ingots recovered from a Handley Page Halifax heavy bomber to the new International Bomber Command Centre. It was also made known that it is BCMC’s intention have a delegation attend the official opening of the complex, which is is adjacent to the City of Lincoln in the East Midlands of England.

[Above: An Avro Lancaster flying over the IBCC Spire. Photo: IBBC.]

Cooperation between the two organisations is logical and most appropriate, for BCMC is home to Canada’s Bomber Command Memorial. Similarly, IBBC possesses two related and striking features known as The Walls of Names and the Memorial Spire.

The stated purpose of the International Bomber Command Centre (IBCC) is “to provide a world-class facility to serve as a point for recognition, remembrance and reconciliation for Bomber Command.” Those honoured by IBCC include Bomber Command air and ground crews, and additionally members of the Women’s Auxiliary Air Force, Air Transport Auxiliary (ATA), Auxiliary Transport Services, ‘Navy, Army and Air Force Institutes’ (NAAFI) and other entities. Combatants and noncombatants alike were united in their determined efforts to protect the democratic form of government and the freedoms and human rights we still enjoy today.

During the Second World War over a million men and women from 62 nations, which included individuals from British Commonwealth countries and former English colonies such as the United States of America, served in or supported Royal Air Force Bomber Command in the fight against Nazism and fascism.

Until the Allies landed in France on D-Day in 1944, aerial bombardment was the only practical avenue through which option for Britain could conduct warfare upon targets with enemy occupied continental Europe and Germany itself. Thus, an intense and prolonged campaign was undertaken with the objectives of crippling sites utlilised to support Nazi Germany’s ability to prosecute war. The bombings furthermore devastatingly brought the conflict directly to the German homeland and thereby affected the domestic population’s morale.

Tragically, as a consequence of years of nearly continual operations, Bomber Command suffered the highest losses of any of the British armed forces during WWII. Yet, the associated veterans have long struggled for recognition of their sacrifices. Every aircrew member was a volunteer, and they willingly served despite the high casualty rates incurred over enemy occupied territories. Sadly, the average age of those who perished was only 23 years.

On the faces of the monoliths that comprise The Walls of Names visitors and patrons may review the listing of the almost 58,000 individuals who lost their lives whilst serving in Bomber Command. Of the total dead, in excess of 10,000 were Canadians, and notably within that tally were more than 800 Americans serving in the Royal Canadian Air Force/ Aviation royale canadienne (RCAF).

In actuality The Walls of Names consists of 270 individual panels that surround the Memorial Spire in a series of segmented circles. The structures and geographic layout augments the already scenic view from atop Canwick Hill of the nearby City of Lincoln and the municipality’s local cathedral.

[Above: The Walls of Names and Memorial Spire. Photo: IBCC.]

Mr. Karl Kjarsgarrd, a spokesman for BCMC and Halifax 57 Rescue (Canada), stated that “the duo of Canada-based affiliates are providing some revered treasure to the International Bomber Command Centre.”

“As a special token of our support for the IBCC, on 11th January we delivered 140 kilograms [approximately 300 pounds] of aluminium recovered from No. 426 Thunderbird Squadron, RCAF, Handley Page Halifax LW682, ” he explained.

LW682 was shot down over Belgium during a nocturnal mission on 13th May 1944 and the entire crew was killed. “This metal is to be incorporated into the IBCC memorial gardens on behalf of the RCAF in recognition of Canada and RCAF-Americans’ contributions to Bomber Command in World War Two,” remarked Mr. Kjarsgaard. (Honouring RCAF-Americans is a continuing endeavour for BCMC.)

The International Bomber Command Centre is located at Canwick Hill, Lincoln. The geographical location is notable because the land upon it is situated is within 4 kilometres (2.5 miles) of Royal Air Force Waddington, the RAF Bomber Command station that suffered the greatest losses.

IBCC is likewise near where the wartime A.V. Roe and Co Limited (Avro) managed facility at Bracebridge Heath was once established. This enterprise recovered battle damaged Avro Lancaster bomber structures and components and again made them serviceable.

The official opening of IBCC is to be held on 12th April 2018 and will therefore take place during the Royal Air Force’s scheduled RAF100 celebrations.

Notably, across the Atlantic Ocean a Congressional Gold Medal bill (H.R. 1553), which would in part recognize Americans who were part of Bomber Command and its supporting agencies, was coincidentally introduced in 2017 into the U.S. House of Representatives by Congressman Tim Ryan of Ohio. 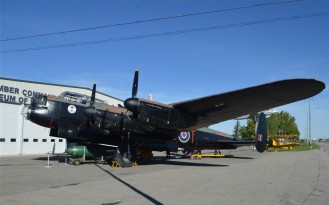 The Representative also later forwarded a written request for a presidential proclamation, which would be based upon H.R 1553, to President Donald Trump.

Unfortunately, at the time of this article’s publication H.R. 1553 remains in committee and the proposed declaration has not been issued.

The author (John T. Stemple) thanks Karl Kjarsgaard, Bomber Command Museum of Canada, Halifax 57 Rescue (Canada) and the International Bomber Command Centre for their cooperation and assistance during the preparation of this article.

Mr. Stemple may be contacted via email at the following address: MilitaryAviationChronicles@Gmail.com