30 October 2021 | (Updated 2 November 2021). On Friday, 30 October 2021, this reviewer sat in Section 303, which brought to mind the famous ‘.303 British’ ammunition that was a staple of the British armed forces, including the Royal Air Force, during World War 2, at Raymond James Stadium and witnessed a high-calibre performance by The Rolling Stones’ Mick Jagger, who was born in the midst of the conflict in 1943. The Rolling Stones are arguably the greatest Rock band, and they would prove it yet again that night. Truth be known, it is probable that everyone anxiously awaited the inevitable performance of the iconic song ‘(I Can’t Get No) Satisfaction’. The song was first released as a single in the United States during June of 1965. It was also featured on the American version of the Rolling Stones’ fourth studio album, ‘Out of Our Heads’, which was released the following month. ‘Satisfaction’ was a hit and also The Rolling Stones’ first chart topping record in the U.S.

The venue, Raymond James Stadium, is 14.48 kilometres (9 miles) north of MacDill Air Force Base and very close to Tampa International Airport. Aerospace was part of the evening, as concertgoers periodically saw commercial airliners pass close to the west while on final approach to the Tampa International Airport and before the show helicopters circled about. Later, the video screen, during ‘Give Me Shelter’, showed video of a Space Shuttle lifting off from Cape Canaveral. A few occasional sprinkles of light rain failed to dampen the crowd’s enthusiasm.

The COVID pandemics were not forgotten, as The Rolling Stones performed the excellent 2020 song titled ‘Living In A Ghost Town‘. ‘Living In A Ghost Town’ is The Rolling Stones’ first single released in 4 years and the composition has received mostly positive reviews from music critics. Notably, it has been a commercial success. The associated webpage states that the tune was, ‘Recorded in LA [Los Angeles], London and in isolation!’ Prior to the band performing the offering, Mick Jagger referred to the mandatory and government-enforced lockdown in the United Kingdom and told the audience, “I hope it never happens again.” The haunting video and lyrics were also fitting and timely because Halloween was the following Sunday. The selection was very well received.

For decades, according to lore, area residents contended that ‘Satisfaction’ was composed in Clearwater, which is located across Tampa Bay from Tampa. On 6 May 1965, The Rolling Stones performed at Jack Russell Stadium in Clearwater. The group stayed at Clearwater’s Jack Tar Fort Harrison Hotel for the night, and while dreaming in bed Keith Richards conceived a riff – a series of notes, chord pattern or musical phrase – containing the words ‘I Can’t Get No satisfaction’. The following day he and Mick Jagger finished the song by the hotel swimming pool.

During a pause, at approximately the halfway point, of the 19-tune setlist, vocalist Mick Jagger confirmed the long-standing belief. He said, that in 1965, “We played four songs and then got kicked off the stage.” He continued, “Every fan knows the rest of the story . . .”  The Rolling Stones, he continued, “went back to the Fort Harrison Hotel in Clearwater and ‘Satisfaction’ was born.” Mick Jagger added, “Now the hotel belongs to the Church of Scientology.” He sarcastically concluded by saying, “We heard they had to ritually cleanse the site of our pernicious influence.”

Later that day The Stones flew to their next destination from Clearwater Airpark aboard a cramped, 1956-vintage Cessna 310 twin-engine aeroplane. Obviously, after ‘Satisfaction’, The Rolling Stones were receiving top billing and for travel necessities chartered light aircraft were replaced by modified commercial aircraft.

To this day ‘Satisfaction’ fittingly describes many ‘Baby Boomers’, who were in the 1960s questioning authority and searching for a more meaningful and peaceful coexistence. The musical ‘British Invasion’ of England’s former American colony was still in its early stage. The members of this demographic group were young in 1965 and everyone heard the smash hit playing from radios across the United States.

In 1965 the United States also increased its participation in the Vietnam conflict and military personnel posted to South Vietnam and Thailand revelled in the tune via the American Forces Network. In addition to U.S. Army soldiers, U.S. Navy sailors, U.S. Marines, and U.S. Coastguardsmen, servicemembers from Australia and New Zealand could also relate to ‘(I Can’t Get No) Satisfaction’. By listening to the popular Rock n’ Roll songs of the time thousands escaped the unpleasant business of war and homesickness if even for a few minutes. To this day, especially late at night, if one who lived through the era hears one of any these tunes he or she can become mentally confused as to the year; the ingrained memories of the 1960s are that strong and the darkness seems to be conducive to mind time travel.

Considering the impact the music had it is therefore hardly surprising that a U.S. Army aircrew assigned to the 188th Assault Helicopter Company (also known as ‘The Spiders’, which was based at Tay Ninh, South Vietnam, named their Bell UH-1C helicopter (66-15179) gunship ‘Satisfaction’. Another was named ‘Lucy in the Sky with Diamonds’. The so-named ‘Iroquois’ or ‘Huey’ flew missions during 1966 – the same year The Rolling Stones’ ‘Paint It Black’ was released and became the band’s 3rd number 1 single in the U.S.

Above: The Spiders’ UH-1C ‘Lucy in the Sky with Diamonds’ in Vietnam. US Army photo.

The ‘C’ model was specifically developed as an (interim) armed version which was intended to fill the need for close air support until the more capable Bell AH-1G ‘Huey Cobra’ could enter U.S. Army service in 1967.

Above: A U.S. Army Bell AH-1G Cobra in flight. Photo: Archives.gov via Wikipedia.

Development of the ‘C’ model began in 1960 and production commenced in June 1965 – the same month and year The Rolling Stones’ ‘(I Can’t Get No) Satisfaction’ began blaring from ‘in-country’ radios, speakers and stereo record players. The UH-1C was widely referred to as the ‘Huey Hog’. To infantry soldiers in combat, ‘Satisfaction’ and others like her were undoubtedly welcome sights.

Within a 26 August 2010 U.S. Army online article, which was authored by U.S. Army Captain Dustin Healey and titled ‘Along came the Spiders‘, Dick ‘Cherry Boy’ Detra, a former 188th Assault Helicopter UH-1C door gunner, is quoted as stating the following:  ‘[T]he Spiders of Vietnam were known to the ground Soldiers and Green Berets as ‘The Spider People’, and were characterized by their reputation for being the only helicopters brave enough to launch when ground units were under heavy enemy fire. Upon the completion of a successful engagement, the Spiders would always sign off with ground forces using their well earned motto, ‘Guns up!”

‘(I Can’t Get No) Satisfaction’ subsequently influenced at least a few Americans of ‘Generation X’ and ‘Millennials’ who served and fought in Afghanistan circa 2010. A U.S. Army Company A, [also known as the ‘Spiders’], 4th Battalion, 3rd Aviation Regiment), 1st Battalion, 3rd Aviation Regiment Sikorsky (then a United Technologies Corporation company) UH-60 ‘Black Hawk’, named after the Vietnam era ‘Satisfaction’, was silently waiting on the flight line at Forward Operating Base Salerno, to undertake another mission in support of Allied ground forces. 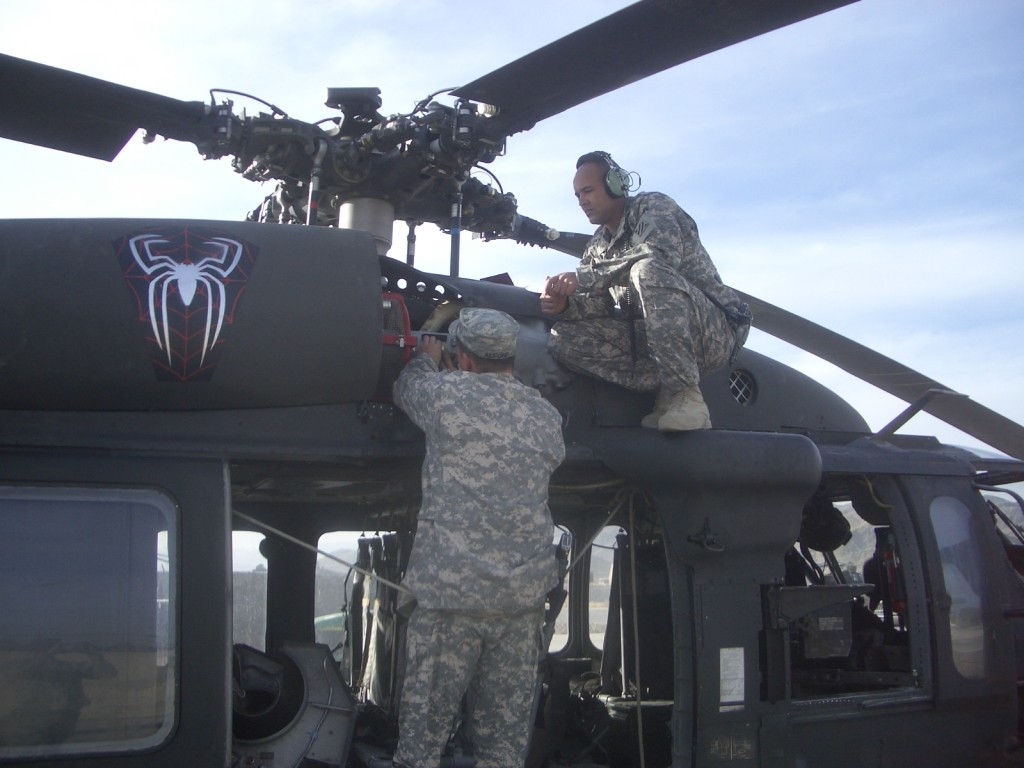 The song’s impact is obviously felt to this day, as evidenced both by the significant percentage of  ‘Generation Y’  and ‘Generation Z’ ticket holders who were in attendance, and the euphoric cheers that arose from every section of Raymond James Stadium when the first notes of ‘(I Can’t Get No) Satisfaction’ left Keith Richard’s guitar. It was the encore, and, while The Stones were still on the stage, a stunning fireworks display lit up the dark sky behind. After the cessation of the aerial display, The Rolling Stones and the supporting performers bowed in thanks.

Most assuredly, no one at the Tampa ‘No Filter Tour’ concert was disappointed. All were quite satisfied with what they had witnessed, but most attendees longed to hear more music from the Stones’ remarkable discography.

Furthermore, judging by his energetic stage performance on 29 October 2021, the 1964 hit ‘Time Is on My Side’, which peaked at number 6 on the U.S. Billboard Pop Singles Chart and became the Rolling Stones’ first top ten hit in the United States, Mick Jagger could justifiably say, as the lyrics indicate, “Time is on my side, yes it is.”

This reviewer, (John T. Stemple), an Aerospace Education Member of the Civil Air Patrol (the U.S. Air Force Auxiliary), first heard ‘(I Can’t Get No) Satisfaction)’ during the month of June 1965. However, it would not be until 29 October 2021 that he saw The Rolling Stones in concert. He finally got satisfaction.

Along came the Spiders

(I Can’t Get No) Satisfaction

‘Living In A Ghost Town’

Living In A Ghost Town

Spiders past and present reunite at HAAF

Time Is on My Side