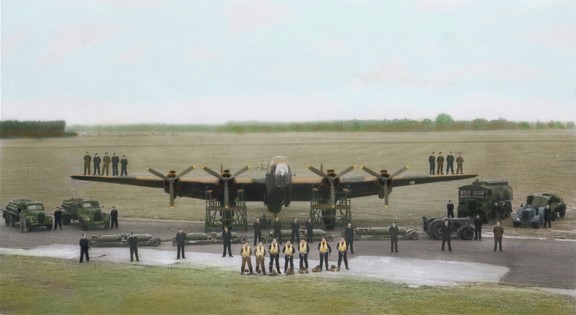 Above: A late mark of Halifax and air and ground crews. Photo: BCMC.

16th July 2014 (updated 7th August 2015) | Nanton, Alberta, Canada. Aviation historians are aware of the thousands of Americans who perished in the air wars against Axis militaries. However, only recently has it come to light that, in terms of numbers of American airmen killed in heavy bomber types, the British-built Handley Page Halifax was the bomber with the 4th highest casualty toll.

Karl Kjarsgaard, Director of Bomber Command Museum of Canada (BCMC) and Halifax 57 Rescue (Canada), conducted the substantiating research and announced his findings to Military Aviation Chronicles.  Mr. Kjarsgaard discovered the following facts: “Of the heavy bombers flown by Americans in combat during World War II the Boeing B-17 Flying Fortress, Consolidated B-24 Liberator, and the Boeing B-29 Super Fortress had the highest casualty rates for aircrew. 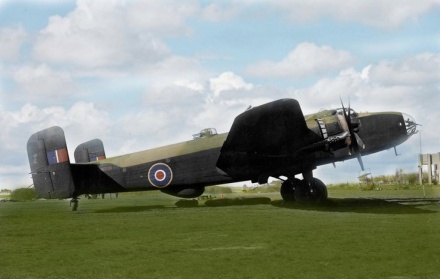 Above: A colour photo of a late mark of Halifax circa 1945. Photo: BCMC.

However, Mr. Kjarsgaard stated unequivocally that historians ‘can now add the Handley Page Halifax as the next most important heavy bomber in American aviation history in terms of sacrifice’. He added, ‘I have the data to prove it’. Karl Kjarsgaard then said, ‘The main point to note is that the majority of these RCAF Americans KIA were crewing a Halifax in combat as opposed to other bombers and fighters. Some 70% of all bomber combat between 1942 and 1945 in the RCAF was on the Halifax’. He noted that ‘Canadians did not fly the more famous Avro Lancaster until the last 3 months of the war’.

Halifax 57 Rescue (Canada) staff are spreading the word about the significant role played by the largely overshadowed aeroplanes. One goal is to eventually raise RCAF Halifax LW170 which flew 29 missions in 1944 — including sorties on D-Day. On 24 June 1944 the Halifax encountered mechanical problems and went down into the Irish Sea while being piloted by Flight Lieutenant Mel Compton of Richmond, Virginia. ‘LW170 is the only Halifax bomber of 1,230 used by the RCAF in WW2 to have survived the war, all the rest were left behind and cut up in England’, stated Mr. Kjarsgaard. He continued, ‘LW170 ditched off the coast of Ireland during a weather patrol after the war. We know where she sank in 6,000 feet of deep water within 2 miles. Now we must locate her and do a recovery’. Karl noted that, ‘I secured a sonar company in Ireland that is willing and able to conduct a sonar survey next summer, but funding is a major factor’. 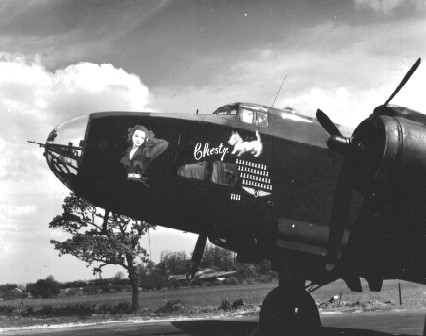 From 1940 to 1942, when the United States was still officially, if not actually, maintaining a neutral stance, many Americans volunteered for service with the Royal Canadian Air Force (RCAF). The United States’ and Canada’s Mother Country (England) essentially stood alone as air, land and naval forces of Nazi Germany and Fascist Italy attacked the homeland and other countries. Democracy was in peril, and the situation was unacceptable to a sizable number of Americans. As far away as the Deep South, patriots did not cotton to the idea of National Socialism swallowing and enslaving Europe. Young men made their way up to Canada and volunteered, at the risk of losing their citizenship, to defend the United Kingdom and the British Commonwealth through service in the RCAF. Americans were naturally called upon to replace the heavy personnel losses in Bomber Command, and, as Mr. Kjarsgaard’s numbers indicate, they paid a high price. ‘We now have good information that the total KIA of RCAF Americans is well over 830 airmen’, offered Mr. Kjarsgaard.

Karl Kjarsgaard added that, ‘On the front burner is the proposed recovery of RAF Halifax HR980 from the swamp north of Berlin in October. I will be going to the swamp in early August to do more study related to this Halifax recovery’. Karl stressed that, ‘Halifax 57 Rescue (Canada)’s priority is to remove the 5 entombed airmen still entombed inside the fuselage and see to their burials with full honours, and I am currently corresponding with the men’s families with that aim’. Mr. Kjarsgaard concluded with a final statement: ‘This endeavour is slated for early October 2014 — if we can secure the funding’. He therefore hopes the public will contribute financially.

The Author (John T. Stemple) thanks Mr. Karl Kjarsgaard for granting an interview. Those individuals desiring more information on Halifax Rescue 57 (Canada) or wishing to support the recovery initiatives should contact the organisation at (403) 603-8592.

The Americans who died for Canada in WWII finally get their due: These men are my heroes