July 2014 | Colorado Springs, Colorado, USA. U.S. Air Force Academy (USAFA) personnel and visitors to the Cadet Chapel readily note the Aircraft Displays at each corner of the Cadet Area. One sees an F-105 Thunderchief or “Thud” in the northeast, an F-4 Phantom II to the southeast, an F-16 Fighting Falcon to the northwest and an F-15 Eagle to the southwest. Interestingly, the static jets date to a remarkable period of technological advancement. With staff and alumni celebrating the institution’s 60th anniversary and the Class of 1964 its 50th, it is noteworthy that these now silent and motionless pieces of winged aluminum attest to the formulation and implementation of revolutionary design principles.

In 1958, as cadets moved to USAFA from the academy’s temporary home in Denver, F-105s were just entering service. Designed with swift delivery of nuclear weapons in mind the large fighter-bombers were heavy and possessed a swept, narrow wing with a high loading that, unfortunately, correspondingly prevented sprightliness.

The “Lead Sleds,” as Thunderchiefs were also known, when tasked with delivery of conventional bombs over what was at the time North Vietnam, suffered a not insignificant rate of loss to nimble MiGs, AAA and SAMs.

Simply put, USAF aircrews, strapped into their speedy but hefty mounts, were all too often encountering ground defenses in planes lacking the inherent ability to bank sharply enough to avoid shifting streams of anti-aircraft fire or enemies in flying machines who could regularly engage and disengage at will.

Even as USAFA’s class of 1964 was preparing to graduate and General Curtis E. LeMay, the serving USAF Chief of Staff, was composing his address to the graduates, a combative but nonetheless visionary and determined reformer, who had been a top Fighter Weapons School instructor, and a civilian colleague were introducing what is now referred to as “Energy Maneuverability” (E-M) theory. 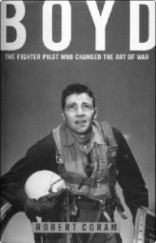 The military member who received the revelation was USAF Maj. John Boyd. Biographer Robert Coram records in Boyd: The Fighter Pilot Who Changed the Art of War the fact that the major was, as Robert Coram states (page 7), “One of the most important unknown men of his time.”

With the goal of producing planes possessing optimal performance capabilities, proponents pushed for practical application of the theoretical. As a result, E-M positively impacted the F-15 program and eventually led to the quite exceptional F-16. Testifying to their superlative engineering, the F-15 and F-16 continue, whenever tasked, to effectively establish and maintain airspace superiority.

As seasons march on and older faculty members depart, the challenges USAF faced over Southeast Asia and afterward overcame slip further into obscurity.

Fortunately, the quadrangle contains tangible reminders. It is fitting that the symbols of that transformative era occupy spaces of distinction.