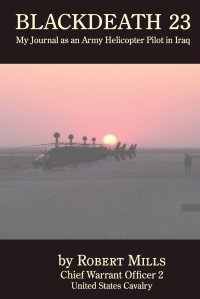 After being employed for a decade in the computer and information technology field, on 11 September 2001, the day of the terrorist aerial attacks on America, Robert Mills was sworn into the U.S. Army at the St. Louis Military Entry Processing Station. Months later he graduated from flight school on the very day Allied coalition forces invaded Iraq. Many would attribute the significant aforementioned dates and coinciding personal milestones as merely coincidence, but Robert Mills tends to question such an assumption.

Was it possible that the Almighty was directing his life? “There are no coincidences with God” is an often heard phrase. For men and women of faith ironies and events can at times be attributed to Divine guidance or will. Robert Mills, a former U.S. Army Chief Warrant Officer 2nd Class (CW2), Bell OH-58 Kiowa Warrior pilot (Callsign “Blackdeath23”) and Iraq War veteran is possibly one. As Jewish and Christian scripture states (Ecclesiastes 3:8), and to which secular world history testifies, there is a time for war and a time for peace. Mills had had peace and would now experience war. Blackdeath 23: My Journal as an Army Helicopter Pilot in Iraq is his chronicle of that saga.

Mr. Mills, who completed two combat tours, was an aviator assigned initially to the 4th Squadron, 2nd Armored Cavalry Regiment and subsequently to the 4th Squadron, 6th U.S. Cavalry. Through daily entries in Robert’s diary readers learn about his daily military experiences domestically and in the Middle East, and the challenges, deprivations and rigors of deployment and life in combat environments.

Those interested in the events in the skies over Iraq the past decade will find Robert Mills’ work in Iraq informative. The many thousands of servicemembers and supporting civilian contract employees who served in Iraq and Afghanistan, and elsewhere throughout the region, will readily identify with Mills’ observations of existence on primitive bases.

Unabashedly interwoven into the narratives are Robert’s heartfelt prayers and reflections. One poignant paragraph, contained on page 153, particularly stirs the soul: “I read a few scriptures my wife had highlighted in my Bible. God must have guided my hands tonight. As many would do, I placed my thumb on the edge of the pages near the middle and opened to a highlighted passage. ‘Those who live in the shelter of the Most High, will find rest in the shadow of the Almighty.’ Psalms 91. I’m thankful she spent the time marking these scriptures. God was speaking to her on my behalf, for this precise moment. It gave me peace.”

Additionally, through Mills’ writings one perceives how military service and associated separations affected his wife and two daughters who concurrently served, sacrificed and suffered due to his absence. Their duty was to maintain the family’s home and they valiantly and dutifully sacrificed unrecoverable years during Mr. Mills’ time with the U.S. Army.

The reading experience is enriching, and the 208 pages fly by in quick order. Therefore, this reviewer (John Stemple) highly recommends Robert Mills’ Blackdeath 23: My Journal as an Army Helicopter Pilot in Iraq.