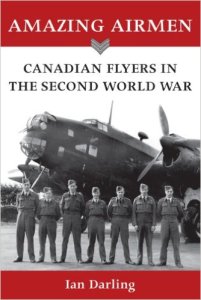 Ian Darling’s Amazing Airmen: Canadian Flyers in the Second World War represents a piece of work that provides accounts of veterans’ sacrifices during the Second World War. Readers are treated to stories of the valour and bravery exhibited by members of the Royal Canadian Air Force (RCAF), Royal Air Force (RAF), U.S. Army Air Corps (USAAC), Luftwaffe (Nazi Germany’s air force) and European resistance fighters and operatives, such as Mabel Vraipont in Belgium who, despite the constant and inherent dangers of their clandestine work, rescued and secreted away downed Allied airmen within the occupied countries.

The factual tales contained in Amazing Airmen: Canadian Flyers in the Second World War are gripping and informative. The work is successful in its aim of recording the sagas of a number of young men who experienced the worst of the aerial fight in the European Theatre of operations.

Those who delve into the volume will encounter twenty essays that tell the experiences of airmen. Three references should suffice to entice potential readers. Within the pages one encounters Corporal Peter Darling, his RAF mates and the Reverend Herbert Cecil Pugh aboard the ill-fated SS Anselm. The chaplain, without reservation or hesitation, willingly gave his life for the benefit of others during Anselm‘s sinking by Kriegsmarine U-Boat U-96. Additionally the fateful sortie of RAF Warrant Officer George Darling and his fellow Halifax crewmates is vividly described. Furthermore, the amazing and incredible survival story of the dreadfully damaged Boeing B-17 Flying Fortress Ye Olde Pub that affected the lives of USAAC Second Lieutenant (equivalent to RAF Pilot Officer) Charles Brown and Luftwaffe Oberleutnant (equivalent to USAAC Flying Officer or RAF First Lieutenant) Franz Stigler — who had originally intended to shoot down the bomber and thereby earn a coveted medal.

Why are books like Amazing Airmen: Canadian Flyers in the Second World War written? Perhaps Ian Darling states it best on page 238: “They [the veterans] want young people to know what they experienced during the war.” Furthermore, they “have something to tell us about the future” because in life youngsters will encounter challenge, and, as Mr. Darling writes, “overcoming these challenges requires the same traits the airmen displayed: courage, initiative, determination — and some luck. This is the legacy presented to us by the survivors of the air war against Nazi Germany.”